Beauty is in the eye of the beholder

A village inhabited since prehistoric times and known thanks to its thermal baths, San Giuliano is located in a favorable geographical position: in the province of Pisa and at the same time not far from Lucca. The main attraction is undoubtedly the establishment of the Terme di San Giuliano today Bagni di Pisa.

Built in 1743 on a project by Ignazio Pellegrini for Francesco Stefano di Lorena, the baths are located inside the summer residence of the Grand Duchy of Tuscany.

The thermal baths facilities became a holiday destination in the 1700s together with those of Montecatini and Bagni di Lucca thanks to the multiple properties of their waters and minerals with beneficial and curative properties, but the well-being deriving from these thermal sources dates back to antiquity. The construction of the thermal structures is due precisely to the Romans: Pliny the Elder names them acquae pisanae and tells us that they already exploited its therapeutic virtues.

Continuing our walk, after a coffee in the central square we crossed it and then to the right, along the ditch of the Mill, a few steps away we were at the “Parco dei Pini”, a park where at the time the spa guests could go to relax in nature.

Originally, the ditch of the Mulino connected Pisa to San Giuliano Terme, excavated in the 10th century it made the waters of the nearby Ozzeri Canal (remaining part of the Auser) flow together to easily transport the marbles from the various quarries of Monte Pisano to Pisa for the construction of various buildings. including those in Piazza dei Miracoli and the walls of Pisa. The stones, through the Porto Pisano, were also exported throughout Italy.

Going back, behind the Palazzo delle Terme you can see a curious structure located on the slopes of the mountain. Following the path that crosses the park of the olive trees, we arrive at the “Kafé Haus” frequented in the past by nobles, artists and poets who stayed at the spa. 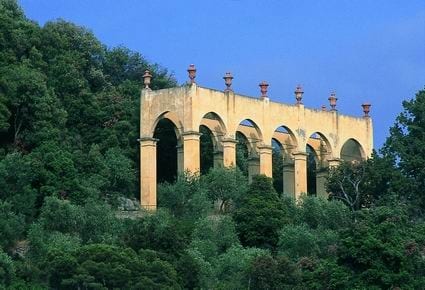 Returning to the car there is this beautiful abandoned building (unfortunately) and it is the former Opera Pia di Bagni di San Giuliano. Finding very little information on the internet, I can only assume that they were “public” spas that could be used free of charge for healing purposes by all residents. What is certain is that in the mid-1900s the spa property was fenced off to allow the separation between bathers and the people. This allowed the construction of some gardens with benches for the relief of bathers, but definitively detached the relationship between Sangiulianesi and their spas.

If you are in the area or pass by, I highly recommend you stop for an ice cream or a coffee. Although it is not a major tourist country, try to grasp the details and find beauty in every corner and I close by stealing this famous phrase by Oscar Wilde: beauty is in the eye of the beholder.

Art is not boring

On April 8, 1820, the beautiful and enigmatic Venus de Milo was found on the island of Milo in Greece. Now in the Louvre Museum in Paris. It’s the most famous statue in the world and one of the most revered goddesses of classical antiquity. You can also call...
Read More

The leaning towers of Pisa

Few chosen (or rather, a few curious) know that in Pisa we not only have the famous leaning tower photographed in January 2020 even from Corsica 190 km away … but we have 3! During my tours I always jokingly comment that in Pisa we have a stability problem (which is...
Read More

There’s not only the Devil’s Bridge

All those who take the highway to go to the sea see that wonderful aqueduct that accompanies travelers by car for a few seconds. Few people know that it was built by the great architect from Segromigno – Lucca, Lorenzo Nottolini. That aqueduct in 1833 will bring clean...
Read More

You can’t say you know San Gimignano if you don’t know who Santa Fina is. Serafina or Iosefina Ciardi, for friends Fina, is a very young blessed who lived in the mid-1200s. From an early age she cultivated a great devotion to the Madonna, in fact it is said that she...
Read More

In full heat and with the fear of a faint, we arrived in Buggiano Castello. What to say? after facing the super climb you say “wow, it was worth it”. Also known as the “Borgo degli citrus” because it enjoys a particularly mild microclimate. Focus and admire the...
Read More

There are villages that do not exist … yes, this sentence made me laugh but unfortunately it has something of reality. While looking for a village to combine with a guided tour while going to San Gimignano I found Colle Val d’Elsa, one of these jewel-like villages...
Read More

The Holy Face, no longer just a legend

Also known as the “black Christ of Lucca” (for the color of the dark brown wood), it is an imposing wooden crucifix of 2.24 meters which, according to the legend of the writer Deacon Leobino, would be the true and only face of Christ. Arrived to us, well in 2020...
Read More

Stroll to get lost

t’s Sunday, you weren’t able to sleep late because obviously you woke up at 8 am, you’ve already had breakfast… what are you going to do? or It’s Sunday, you would like to be in touch with nature (but not too much) you are not a super sportive one (like to do 8 hours...
Read More

Italy as we know it

Italy is divided into 20 regions (use this official link Italia.it to know the “boot”) The total land area of Italy is approximately 301,328 square kilometres. The regions are divided into provinces, 110 in all, varying dramatically in size. Tuscany it’s a REGION....
Read More